Posted on June 21, 2014 by helpmeunderstandall 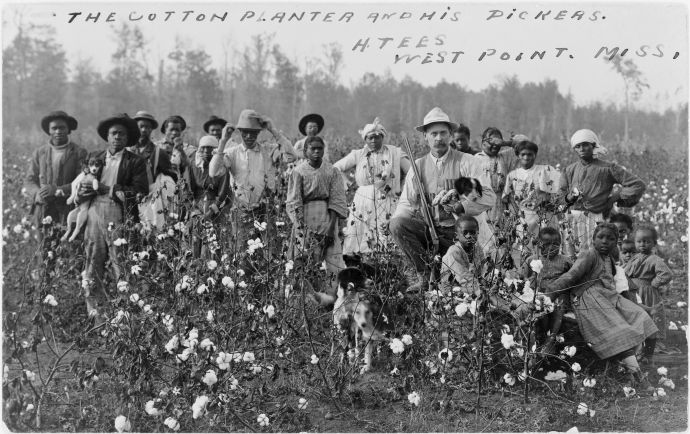 Juneteenth is the oldest known celebration commemorating the ending of slavery in the United States. Dating back to 1865, it was on June 19th that the Union soldiers, led by Major General Gordon Granger, landed at Galveston, Texas with news that the war had ended and that the enslaved were now free. Note that this was two and a half years after President Lincoln’s Emancipation Proclamation – which had become official January 1, 1863. The Emancipation Proclamation had little impact on the Texans due to the minimal number of Union troops to enforce the new Executive Order. However, with the surrender of General Lee in April of 1865, and the arrival of General Granger’s regiment, the forces were finally strong enough to influence and overcome the resistance.

Later attempts to explain this two and a half-year delay in the receipt of this important news have yielded several versions that have been handed down through the years. Often told is the story of a messenger who was murdered on his way to Texas with the news of freedom. Another, is that the news was deliberately withheld by the enslavers to keep up the labor force on the plantations. And still another, is that federal troops actually waited for the slave owners to reap the benefits of one last cotton harvest before going to Texas to enforce the Emancipation Proclamation. All of which, or neither of these version could be true.  For whatever the reasons, conditions in Texas, to keep things as they were, well beyond what was statutory.

One of General Granger’s first orders of business was to read to the people of Texas, General Order Number 3 which began most definitely with:

“The people of Texas are informed that in accordance with a Proclamation from the Executive of the United States, all slaves are free. This involves an absolute equality of rights and rights of property between former masters and slaves, and the connection heretofore existing between them becomes that between employer and free laborer.” 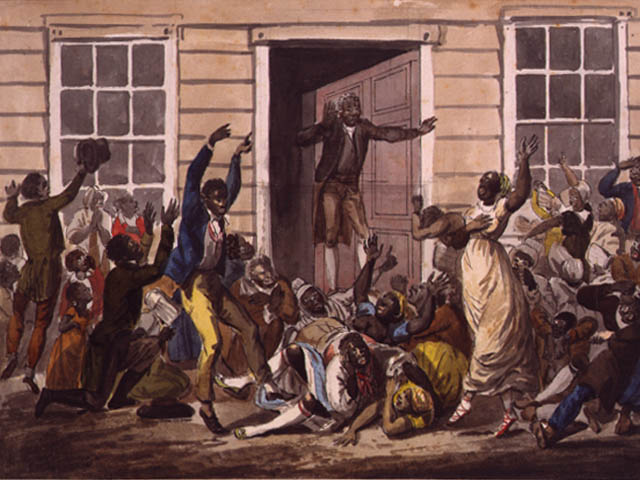 The reactions to this profound news ranged from pure shock to immediate jubilation. While many lingered to learn of this new employer to employee relationship, many left before these offers were completely off the lips of their former ‘masters’ – attesting to the varying conditions on the plantations and the realization of freedom. Even with nowhere to go, many felt that leaving the plantation would be their first grasp of freedom. North was a logical destination and for many it represented true freedom, while the desire to reach family members in neighboring states drove the some into Louisiana, Arkansas and Oklahoma. Settling into these new areas as free men and women brought on new realities and the challenges of establishing an heretofore non-existent status for black people in America. Recounting the memories of that great day in June of 1865 and its festivities would serve as motivation as well as a release from the growing pressures met in their new territory. The celebration of June 19th was coined “Juneteenth” and grew with more participation from descendants. The Juneteenth celebration was a time for reassuring each other, for praying and for gathering remaining family members. Juneteenth continued to be highly revered in Texas decades later, with many former slaves and descendants making an annual pilgrimage back to Galveston on this date.

Most states celebrate Juneteenth during the month of June. (Including The 19th) 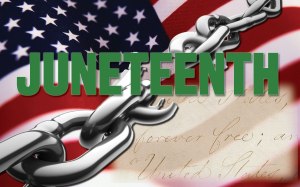 The Thirteenth Amendment to the United States Constitution abolished slavery and involuntary servitude, except as punishment for a crime. It was passed by the Senate on April 8, 1864, by the House on January 31, 1865, and adopted on December 6, 1865. On December 18, 1865, Secretary of State William H. Seward proclaimed its adoption. It was the first of the three Reconstruction Amendments adopted following the American Civil War.

The US slaves were set free, but worries about the unknown, caused doubt.  When given a chance to enjoy real freedom  most were hesitant. How would you react? Or would you choose to stay in the same old situation, because of fear of the unknown. Some have never experienced slavery, but most have; rather they know it or not!  It starts in the mind. Slavery has to be in  the mind of the person.  You can be a slave and be free, or you can be free and still be a slave!

Every major ancient civilization depended heavily on the service of slaves, conquered people set to a variety of tasks by their masters.  The scripture states that the Hebrews became slaves of the Egyptians,  under whom they carried out forced labor ‘in mortar, in brick, and all manner of services in the field’. Exodus 1:8-14

During the time of Apostle  Paul the in the Roman empire over half the population or more may have been slaves.  Depending  on the interest of the ruling masters. Joseph was sold as a slave to the Egyptian Potiphar.

The majority of slaves in those days were often used as property to be bought and sold as needed. Males were often assigned construction  or in mines to dig and worked so until exhausted to death. The women were maid servant, were usually sold to well to do men for service to their wives or daughters . But most were used for sexual pleasures for men.

If you would like to know more , it all located in the Bible.

However, I must say, when it comes to slavery, it can be a terrible thing for anyone. Being a slave is no fun! Being used against your will is terrible for the one being used. I know in the US slavery was a welcomed entity, however some greatly opposed the Institution of Slavery. If I may, I would like everyone reading this article to take a moment; stop reading and close your eyes and think back. Now let your mind wonder what would have been if….. or  place yourself in the moment, and time. Let yourself become a slave. Go back to the plantation and  stand before your master and go inside the mind and body of a slave. You for a moment become the slave. Look upon your master’s face and see his frowns, and the yelling and the whip sliding across your back. Stop and look at your children being snatched away from you, to be sold right before your eyes. Look at your wife being sold, or your husband being sold. You hear your daughter screaming from the barn, while she is being raped by  the massa or the massa’s son. ALL YOU CAN DO IS STAND THERE AND ENDURE THE PAIN. You are waken up every day around 4:00 am to go into the fields to pick and package cotton. Your fingers hurt, your back hurt, your legs hurt and your stomach hurts. No where to run, nowhere to hide. You are A SLAVE, and you ain’t nothin but a black nigger, who deserves to be treated like a nothing and a nobody. You hear all the names you are being called, you hear about all the beatings they enjoy giving, you hear about all the lynchings. But what can you do! What can you do!  The only thing you can do is PRAY!  You have no identity anymore, you have no home anymore, you have your heritage stolen, you have you history stolen, you are nothing and nobody but a slave. You work, work, work and work for them but where is your wealth! It’s been stolen too. Now you can come back. Now why do you hate  me? Can you feel the hurt and the pain. That’s the story of a slave!

Steal Away, Steal Away to Jesus 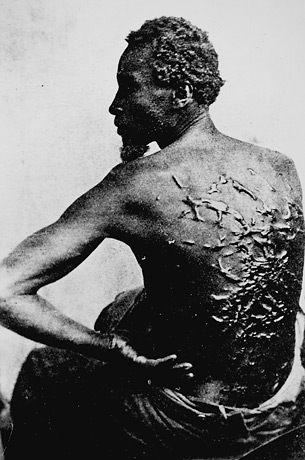 “O, freedom over me. And before I’d be a slave I’ll be buried in my grave An go home to my Lord An’ be free”

But God is forgiving and so are we!

Back to slavery: Once the slaves were declared free it was so hard for some to walk away. Addictions can be as addictive as slavery. Both were and is so hard to let go, to get rid of. If you are addicted too any thing you can stop being addicted over night you usually have to go and get some help. So being a slave to something or someone is not healthy.

Remove the chain of prisoners, who are chained unjustly. Free those who are abused!

These are all some type of addiction, so if addicted then “You Are A Slave”.

1. Being a slave is hurtful.

2. It destroys you and others.

3. Being a slave is losing something dear to you.

4. Being a slave is TO BE  taken away from the things you love.

5. Being a slave is having no say so about anything.

6. Being a slave, you have to do as your master tell you.

8. Being a slave is having your real identity taken away from you!

9.  Being a slave means you have no life, but the life your master has chosen for you.

10. Being a slave takes away your pride., self – identity and  originality of the person you once were!

I’m sure you know what I mean. When you become a slave you lose all of self you belong to what ever or whom has the control or power over you. So can you imagine how slaves in US history must have felt. You were somebody in your homeland,  then you came here as a slave and lost everything, your identity, your namesake, your family, our health, your culture, you get the idea.

Many of our ancestors were brought here more than  one hundred years ago: many of our Fathers, many of ourselves have fought and bled for the independence of our country. Do not expose us to sale. Let not the spirit of the father behold the son robbed of that liberty which he died to establish, but let the motto of our legislature be: The law knows no distinction”. James Forten (1766-1842)

Freedom is a hard-fought thing and millions are in chains, but they strain towards the new day drawing near. Paul Roberson (1898-19760)

Your petitioner therefore prays your Honorable Court to grant him leave to sue as a poor person, in order to establish his right to freedom. Dred Scott (1795-1858)

BUT !  THERE WAS AND IS ONE AND ONLY ONE-WAY OUT!  HOPE IN JESUS CHRIST. Some chose to die at their own hand than to suffer at the hands of their slave owners. BUT THE HERO’S WAY OUT WAS TO ACCEPT JESUS CHRIST INTO YOUR LIKE AND BELIEVE, HE WOULD COME THROUGH FOR YOU! SO ITS TIME NOW TO GIVE IT TO JESUS CHRIST!

Father, Oh, Lord Our God and Saviour Jesus Christ, we call upon you Father to heal the land and Father please set your captives free. Lord on High we need you to day, Lord we Thank You today. God you are our Father and we need you in our live so that we can live for you. Lord we need you in our live to see the world and the people in it through Your eyes. Lord you are Our Keeper, Our Deliverer, Our Protector, and Our Master. Lord Our Father, help us humble ourselves so that we may be able to love others as you love us. Lord Jesus please God, keep us in Your hands so that we may not destroy each other. Lord kill the hatred in each of us. Lord help the world heal. Lord and I pray for the heads of states and the heads of the nation. Lord please clean their hearts, help them understand that we were created to serve you in the Highest.  Lord let them see that every decision affects the masses. So Lord help them turn from their wicked ways and turn to You once again. In Jesus ‘ Name I Pray Amen, Amen, and Amen!!! Father heal the Land!